Are you crazy? Why Guts? The beginning of the story.

Posted on September 22, 2011 by timothygrantcarter

I am unorthodox and eccentric anyway. So yes, I am crazy

in a way. And I sure have Guts.  Like starting this blog before

really can get it to function and look like I want it to. I guess

I guess that’s crazy and it may take guts.

community to see who could punt, pass and kick the farthest.

Being from a football town, every boy thought they could. I

try the hardest; and so I did. I must have passed and thrown that

football a zillion times. If I didn’t have anybody to pass it to; I

passed it back up the back yard, the same way I passed it down.

do it in my sleep.

So, on the day of the competition I was all keyed up and ready

to give it my best.  But like most kids I was a show off & somebody

dared me to jump over the fence. I did. But the problem was that

back of my leg. When I pulled the barbs out; you guessed it, out

came some of the muscle tissue of my leg.

get it sewed up but I would not hear of it. Because I had not

competed yet. (I’m sure they would not today in our sue happy

world) but back then, I was able to talk them into letting me

compete before they drug me to the doctor.

I did my best. Regardless of my leg; I had GUTS and just had

to have a chance to compete.

When I came back, the officials had a special announcement to

make. The announcement was that a young boy who wouldn’t

give up had won the competition; because he had a lot of GUTS.

And that is the beginning of the story. 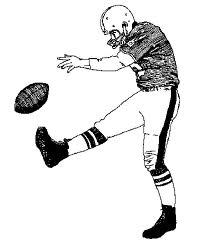 Author, Trainer, Pastor, Inspirational Speaker, 12 step follower Thinker, Entrepreneur, Outdoorsman, Hunter, Fisherman, Gardener, and Shotokan YonDan (5th degree black belt). Visionary; Maker of original sayings, slogans and giver of spiritual help. "If God has a pulse, then I can feel it." Nicknamed "Slam" / Creator of #Slamism ... 's on Twitter @cccdynapro
View all posts by timothygrantcarter →
This entry was posted in GUTS - What is it?. Bookmark the permalink.