Posted on June 22, 2020 by timothygrantcarter

I’ve written several articles about my Father, John Woodard Carter Sr. Still, here I am writing another. And it’s odd, dad hasn’t been here since 1998 and I probably learn as much from him today, as I did while he was alive. I guess part of it was that I was too preoccupied with what I thought was important, to see what was truly important. But then again, maybe I was learning more than I knew. My father taught me many, many lessons. He was a powerful man, in a day when men were still men. Daddy was the toughest man I ever knew. I could tell stories after stories about his strength, fortitude and toughness.

But daddy was also a fair man. If you were trying and the world was pitted against you, then daddy wasn’t afraid to stand up for you. Didn’t matter who said what. Didn’t matter about public opinion. I don’t guess there was political correctness back then. But it wouldn’t have mattered, daddy stood firmly on his own principles. And one of his greatest principles was Mercy and kindness. I remember as we were going through Texas on a trip, a poor old dog was covered with mange and ticks. I will never forget that Daddy took the time to pick every one of those swollen ticks off that poor old dog. Of course he fed the dog. And then put burnt motor oil on the dog to try to help it recover from the mange. Daddy was just that way.

He was unorthodox. I remember getting in a fight when I was a boy. Actually it was more of a gang taking advantage of me. But I remember my daddy making me stand up on my own. And I remember the boy’s father coming over, like he was going to do something to my dad. He decided my father’s methods were Fair after all, when he met him.

A lot of people have to look for sports heroes or all over the place to find legitimate and worthy role models. I never had to look any further than home. Daddy was always my hero. It’s true he was hard and sometimes that was difficult. But I never doubted that my daddy loved me. I remember I had very bad respiratory issues when I was child. And I got some kind of a flu mess and got very very excited and could not breathe. Daddy came in and slapped my chest with the palm of his hand like a Thunderclap. I cried for a moment. But I started breathing freely.

Daddy’s means may have been unorthodox but they were always effective and and taught lessons greater than words alone could have. Daddy was a great man of Faith but he wouldn’t have said so. Although he didn’t talk about it very much faith, he demonstrated it. I remember after a cancer surgery, that he swole up double his size during the night because of some internal stitching of his surgery came loose and his body was filling up with fluids. And they weren’t going to be able to get him back in the emergency room quick enough to operate again and stop it. But my father told me to come there. And while we were all alone and things looked truly like my father would immediately die, he took my hand and said the 23rd psalm from memory in that dark hospital room. I remember that the room literally lit up as Angels came through the windows. My father was healed and I got to enjoy him several more years. Heck, I didn’t even know my daddy knew the 23rd Psalm up to that point. Much less that he could say it so reverently and prayerfully from memory with all his heart.

Although Daddy had many issues with my immaturity and impulsiveness. Daddy always let me know that he thought that I was smart and that he believed in me. There’s no substituting the inner peace that gives a son. Dad always knew that I had some type of experience with God and that it was real. I remember not too long before he died. That Daddy sat down and shared his salvation experience with me, that happened when he was a child. He knew that I was deeply concerned about everyone’s relationship with God. And wanted me to know for sure that he had peace with his Maker.

Even though Daddy went to church and took me to First United Methodist Church as I grew up. in a deeper way Daddy didn’t really think that the church was the church. Daddy thought that there was an inner Temple inside each one of us that God wants to reside in. And taking care of that inner Temple was the true church where God dwelt. The true habitation of the Spirit. He never discussed it with me but I always knew that my dad belonged to a fraternal organization of good men. Daddy was all about being the right thing, more than just saying it.

Daddy could fix anything. He was a Duke power lineman. He was an electrician. He was a tree surgeon. He was a very good Carpenter. He could weld with every type of welding machine. Daddy could Garden. Daddy could Farm. Daddy showed me principles of masonry and helped me lay a foundation to a home of mine. Honest to goodness, Daddy was not only a jack of all trades, he was an expert at most. Some of my favorite words as a little boy were “Daddy Fix It.”

Sometimes I feel like Daddy is with me even though I can’t see him there. I remember when Daddy fell dead in his shop, with my son TJ. I had spent the morning with him. Somehow I knew I had to be there even though he wasn’t in any danger, as far as we knew. At least an immediate sense. I Drove all night from Florida, so I could be there to be with him in the morning when he got up. As it turned out, that was my last time with Daddy. When he fell dead, as I rushed out to his shop, because TJ had called me on the intercom. I thought I could bring him back. I thought there was a pulse. But as it turns out it was just a pacemaker still operating. But as I gave my father CPR, I could clearly feel and almost see him behind me in the air, at the roof level of the shop watching me with pride that I was trying to bring him back. Many times today it’s like that and I sense somehow that he’s there, if only that he’s so deep inside me, that in a way he’s everywhere I go.

Dad would be glad that me and my older brother John have resolved our differences. It seems like each year we get a little closer. I think Dad would like that.

Today I live in my father, mother and sister’s honor. Each time I try to reach out and help someone, I’m sure it’s because of the Headstart that I had in life, because I was so blessed with wonderful parents and a good family!

So in a private place today, I celebrate my Father John W Carter Senior. I could tell many-many-many more stories about him and each one of them fascinating, true and full of the greatness and goodness of this man, that I got to know as my father, while he walked the Earth. I love you Dad and I always will! Happy Father’s Day! 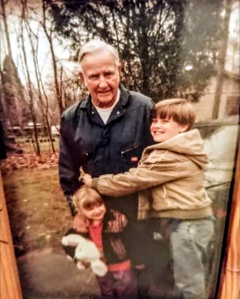